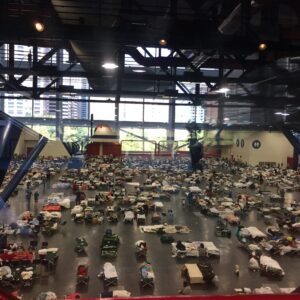 I went at midnight (shhh no one tell my mom) and was turned away, too many volunteers. I went back at 9:30 am on Thursday and stayed until 10:30pm. So much to do!

There was a short line at the door. I was padded down and screened. Once in, no one asked you any questions. I found the volunteer area, signed in (it took a few seconds), and then they had you participate in a brief orientation. I had signed up online, but they had a backlog, so showing up worked.

Like at NRG Center, you waited in a volunteer pool area, and a volunteer or worker would come by and ask for however many volunteers they needed for the task at hand. 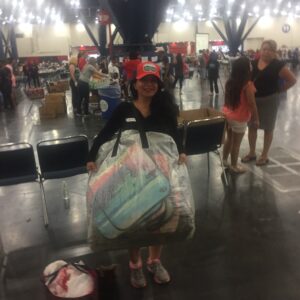 I was asked to film a video in Arabic letting people know that they shouldn’t be afraid of the government…that they were Houstonians…and that they were welcome to seek refuge. <3 I also was a floater in one of the halls, making sure people had what they needed, and they were comfortable. I helped fold cots as people were discharged, and also thew away the pillows, blankets, etc. that people had used, but left after they had been discharged. Once the items are used, they are considered contaminated, and must be thrown out.

People either didn’t take the items because they didn’t want them, or had no way of carrying them. I had mentioned in a FB post that tote bags/shopping bags are a great donation item in these cases, and to homeless shelters in general as well.

By the end of the night, they had also run out of blankets and baby powder. Tons of diapers, but no baby powder.

There was still a mountain of items being sorted through. And an army of people sorting…wow. When I was at NRG Center, there was a wedding dress in one of the donation boxes…sigh. 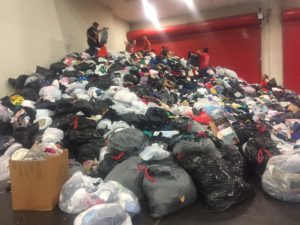 Future: This is what I’ve learned to be prepared for the future. Things that are needed, but people don’t think about: new underwear, socks, magnifiers for reading, tote bags, baby powder, feminine hygiene products. Sort and label all items.

At the time, they had people staying in multiple halls still. A, B, C, D… but they were consolidating them. We helped in that effort.

Phone: There is a program called Safe Link for individuals with a lower income that could help them with a phone for limited use. 350 minutes, unlimited texts, and a small amount of data. It’s paid for by one of the taxes on our phone bills. I’m going to make a separate post about this. This is a great program year round, not just disasters. 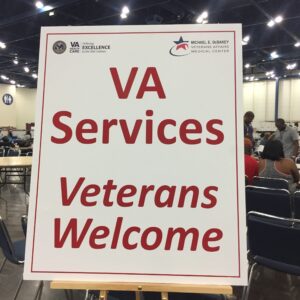 Veterans: At GRB, there was a table just to help veterans with food, housing, and transportation.

NRG Center: I started at the NRG Center on Wednesday because I read that Arabic speakers were needed. There were so many people, that people were turned away and told to come back at 4pm or midnight. I signed in with all of the volunteers,  and then all of the foreign speakers were there at the moment were asked to go to intake to sign in with them. They told us they would call or text us if they needed us, so I went to look around. In the area that people were getting their clothes, bedding, etc. the guests didn’t have bags to carry their items. They were using diaper boxes, or their bare hands, That’s what confirmed my idea about donating bags…. 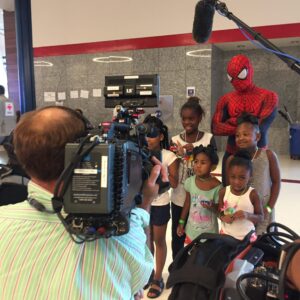 There were sooo many people there to help  make the environment better! The stilt walkers that came out for the kids. Face painters…Belly dancers. Even Spiderman made an appearance! The Houston make up artist (MUA) and hair FB group that came out to give hair cuts, styles, and my favorite!!!! blowouts, OMG!!! Sprint and Verizon where there charging phones! And I heard Verizon was helping to dry out water logged phones. People were putting their gifts to good use. So inspiring! If you think you have a skill that doesn’t come in handy…think again!

Much gratitude as well for the people feeding volunteers, and the wonderful food. Thai Cottage provided lunch, and Sleek Chocolatier provided chocolate covered waffles the day I was there. 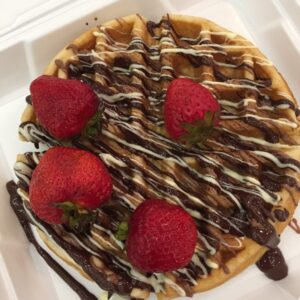 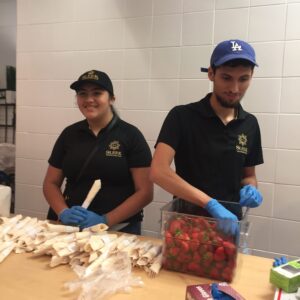 With everything shut down in downtown, it made it easy to plow through a day of working when you have access to food and drinks. Sleek Chocolatier was a family affair, and the littlest of them was out there front and center making sure we all had a waffle. He was quick to give me the lowdown as to which family member owned which location… 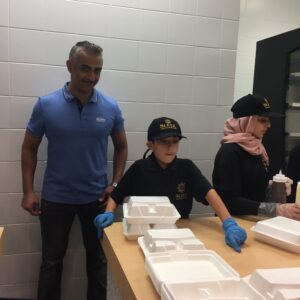 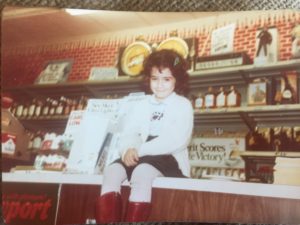 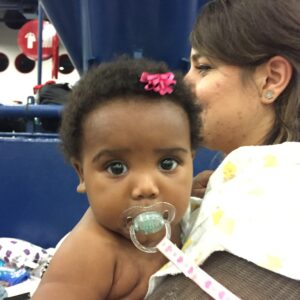 I also had the pleasure of talking to the neatest people. A woman from Minnesota that served as the first parole officer in New Orleans…the Amarillo police department that could each benchpress five of me…the cutest babies ( I was given permission to snap her pic)…a 75 year old woman named Lillian that was praying for all of us single ladies out there (including herself).

This weekend, I am trying to see what else I can do. It’s going to be tough, balancing being back at work, the what nots of life, and volunteering….but it could be way tougher… So, it’s time to get to work.

What is the probability that I’m procrastinating probabilities coursework with a belated Christmas post? 😉 100% probable! A belated Merry Christmas and well wishes for the new year!
On a pandemic note - what a year! If you find yourself falling into unproductive patterns or discovering new ones, I recommend taking a peek at Susan David’s work. She writes all about Emotional Agility and how to break down and process what you are feeling, and choose a resolution.

I know I've been feeling the effects 🙂 More pandemic time has equaled more time alone and an inordinant of time escaping to my social apps! (Just when I thought I was no longer a procrastinator). I'm working on choosing to set schedules, spend more time taking walks outside, etc.

Very grateful for the gift of Christmas and the opportunity to change my choices!
#grateful #susandavid #getunstuck ...

One of my $5 or less party tricks: @thatstastyorganic edible flowers. $3.99 at @wholefoods to be exact AND they can turn a standard cupcake into a celebratory affair. While on the topic of flowers, I wanted to share an observation. I recently placed a pansy in a planter box and within days the plant went from upright to tilting completely forward. The poor little pansy was stretching towards sunlight. Plants crave sun and water... That’s because they’ve never tasted queso 😉 Neither have they experienced disappointment, loss, anxiety... Being a human is simultaneously simple and complex. Luckily, we have many tools, in addition to queso ;), in our tool box to handle the complexities of life, and here’s one of them. My doctor recently reminded me that it’s easier to replace a habit/response mechanism than it is to eliminate one. The swap can be life-changing! That brings me to an even more powerful tool. Getting to the root. When we can identify why we are doing what we are doing, and address it, we can prevent other habits from cropping up. We, like my little pansy which is now basking in the sun on my patio, need strong roots to fully thrive. 😉 #perspective #growthmindset #growth #theoutsiders #inspiration #motivation #changeyourmindset #changeyourperspective #streetscene #anxietyfree #stressrelief #stressless #anxietymanagment #growthfactor #growthfactors #partytreats #partytricks #partytrick #edibleflowers #thatstasty #onwardandupward #htx #wholefoodsmarket #changeyourhabitschangeyourlife #cupcakesofinstagram #changeyourlife #fivedollarsorless ...

Happy birthday to my alma mater, the University of Texas at Austin! I delayed my start date there by a year. I needed that time to build up the confidence to leave home. And now, here I go, again ;). Six years after my departure from the fashion industry, it's time to introduce you to Nifty Lane hats and fascinators - a collection of conversation pieces and fashion basics. The pandemic inspired the fascinators you see in the carousel. My intent was to transform pivotal moments and movements into statement pieces. (link in bio to the whole collection).

In many ways, I’ve felt like a “late bloomer” in life. Comparatively speaking, I have been. Therein lies the challenge - “late” is relative, and comparison, as the adage states, is the thief of joy. When I get all caught up in my head and my expectations - I have to remind myself of the following - divine timing is perfect AND sometimes, the longer it takes to get somewhere, the more you discover, uncover, and grow along the way. ❤️

One of my favorite books is The Outsiders by S.E. Hinton. In a pivotal scene between a “Greaser” and a “Soc” - two people on the opposite ends of the spectrum in many ways - the two come to the conclusion that maybe their lives aren’t so different. After all, they share the same sunset. “It’s rough all over, “ states one of the main characters. It sure is. It’s beautiful too. A few of my favorite sky shots in the stories. If you’re looking for an instant dose of peace, I highly recommend looking up. Fast and free. ❤️#alwayslookup #perspective #peace #sunset #whataburger #peacebewithyou #sunsetphotography #sunsets #growthmindset #growth #theoutsiders #inspiration #motivation #cloudsofinstagram #cloudscape #sky #skyshot #changeyourmindset #changeyourperspective #streetscene #streetscape #houston #htown #houstontx #hou #anxietyfree #stressrelief #stressless #anxietymanagment ...

Since I missed #nationalicecreamday, can we talk about bread? And I’m not talking about a crusty sourdough, or maybe I am. There’s a line in a popular prayer that goes something like this - “give us this day our daily bread.” A very specific, thoughtful, and practical ask. The prayer doesn’t say “give us bread with a side of caviar while on a yacht...” or “give us unlimited bread, like at Olive Garden.”

The simplicity of “one day at a time,” can be the remedy when anxiety and fear are being served up like unlimited bread sticks.

This post is inspired by a lesson I picked up at @ecclesia_houston last Sunday. I needed to hear it, so I thought I would share.

When business as usual is on hold, it might be time to go blue. Blue ocean, that is. Developed by Chan Kim & Renée Mauborgne, a blue ocean strategy is about creating a new market space. So, what’s a “red ocean” strategy? You guessed it. In a red ocean strategy, you are competing in an existing market. While it might seem risky in the midst of a pandemic, so much upheaval can be the perfect growth opportunity. There’s even a framework to help you create a blue ocean all your own. The four components of the framework are:

Here’s an example: Cirque du Soleil eliminated animal acts and star performers, raised the artistry and venue quality, reduced the “danger” and thrills, and created a fusion of theater and circus. They also raised the price as compared to a standard circus.

Ready for the two-fer? If you’re not ready to apply the blue ocean strategy to a business venture yet - I think this same framework can be applied personally.

Thanks to @quanticschool for the lesson on blue ocean strategy! @quanticschool is revolutionizing the MBA - mobile first, serious value, and a 12 month program. They also offer several introductory courses at no cost.